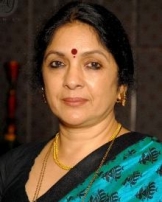 Neena Gupta is an Indian film and television actress and director. She won the 1994 National Film Award for Best Supporting Actress for Woh Chokri. She is a popular actress in Indian commercial cinema, but it is her work with art filmmakers of India that got her recognition as an actress of considerable repute. She also presented the Indian television quiz show, Kamzor Kadii Kaun.

Gupta was born to R.N. Gupta. She is a 1980 alumnus of National School of Drama, New Delhi, India.

She had a brief affair with married former West Indian cricketer Vivian Richards, with whom she has a daughter, Masaba. She was also involved in relationships with Alok Nath and Sharang Dev. On 15 July 2008, she married New Delhi-based Vivek Mehra, a chartered accountant, in a secret marriage in the United States.

Gupta has made appearances in several international films, such as Gandhi (1982), in which she played the niece of Mahatma Gandhi, and the Merchant Ivory films The Deceivers (1988), In Custody (1993), and Cotton Mary (1999).

She starred along with Madhuri Dixit in Khalnayak (1993); she was featured in the popular song 'Choli ke peeche' in the movie.

She also hosted the Indian version of the TV series The Weakest Link, Kamzor Kadii Kaun (Star Plus), and appeared in Jassi Jaissi Koi Nahin (Sony TV) which gave her considerable popularity.

She has also directed successful TV series, such as Saans (1999) and Kyun Hota Hai Pyaar, and has made the telefilms Lajwanti and Bazar Sitaram (1993), which won the 1993 National Film Award for Best First Non-feature Film. She also played the role of Shobha, one of the four women main leads in Ladies Special, a daily soap on Sony TV.