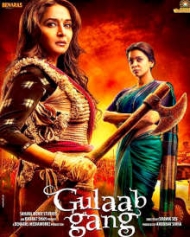 Gulaab Gang is a social, action, drama movie  focussing on the struggle of women in the country.

The film tells the story of a gang of Indian women dressed in pink coloured saris, fighting against social injustice, operating in Bundelkhand Uttar and Madhya Pradesh (central India).

Initially, it was reported that the movie was based on Sampat Pal Devi's life to evolute "Gulabi Gang", but the director refused on this respect that he obliged her work but the movie is not based on her life.