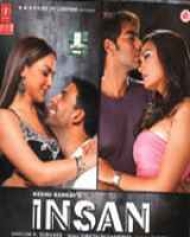 Insan tells the story about Amjad who is a auto-rickshaw driver in Bombay, and lives with his mother in a small tenement in Bombay's slums. His mother had originally given birth to another son, Munna, who has been missing for several years. She is over-joyed when Munna returns home, and both she and Amjad welcome him, and celebrate.

They do not know that Munna is now known as Azhar Khan - a member of a Jihaadi terrorist group, who is now using Amjad and his mother as a cover, in order to carry out a deadly and daring terrorist attack.