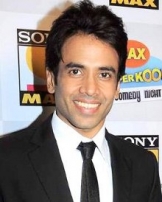 Tusshar Kapoor is an Indian actor. He is the son of Bollywood actor Jeetendra and Shobha Kapoor and brother of Ekta Kapoor. He studied at the University of Michigan.

He made his debut with Mujhe Kuch Kehna Hai opposite to Kareena Kapoor in 2001, which was a box office hit and he received the Filmfare Best Debut Award. The next two years were followed by a list of box office flops. However, he was noted for acting alongside his father in the teen slasher film Kucch To Hai (2003) and receiving acclaim for his role as a shy boy who gains the ability to become invisible in Gayab (2004).

After two years without any major box office successes, he gave a critically acclaimed performance in Khakee (2004) in which he starred opposite film legend Amitabh Bachchan and the film was a major success at the box office. He then had his second major box office hit with the comedy Kyaa Kool Hai Hum (2005). In 2006, he starred in the multi-starrer comedy, Golmaal as a mute man for which he won much praise from critics and audiences.

He has also acted in Golmaal Series.