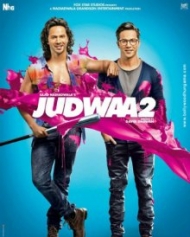 Judwaa 2 is a reboot to the movie Judwaa, which starred Salman Khan in the lead. The movie is all about Prem and Raja(both played by Varun Dhawan) who where separated at birth by a smuggling racket. How they reunite and fight against the smuggling racket forms plot of Judwaa 2.

Reportedly, Salman Khan will do a special cameo appearance in Judwaa 2.