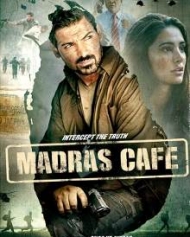 The movie is set against the backdrop of the assassination of Indian Prime Minister Rajiv Gandhi. The film has been titled Madras Cafe, as the plot to kill Gandhi was hatched at the cafe. The original location of the cafe is not specified in the film.

Story in detail:
The film, set in India and Sri Lanka, is a political spy thriller set against backdrop of the Sri Lankan civil war. Vikram Singh (John Abraham) is an Indian Army special officer who is appointed by the intelligence agency Research and Analysis Wing to conduct covert operations in Sri...