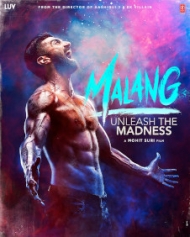 Malang is a 2020 Bollywood revenge-drama, directed by Mohit Suri. The movie will be shot entirely in Varanasi and Shimla. The movie stars Anil Kapoor, Aditya Roy Kapur, Disha Patani and Kunal Kemmu in the lead roles.

Plot: Malang begins with a solid punch where a hunky Advait (Aditya Roy Kapur) knocks off several of his fellow prisoners in a jail in Goa. After being released as a free man, he dials up the number of a cop named Anjaney Agashe (Anil Kapoor) and informs him that he's about to go on killing spree.

One after another, cops are bumped off in a brutal manner. Anjaney along with crime branch officer Michael Rodriguez (Kunal Kemmu) begin a hunt for Advait. Meanwhile through flashbacks, we are introduced to Advait's backstory which holds the key to the killing spree.

Five years ago, he was backpack trippper who bumps into a free-spirited girl Sara (Disha Patani) at a rave party on Goa. Post a one-night stand, the duo begin to bond over adventure sports, drugs and other thrills and make a pact to make most of their time together.

However, their adventurous life soon crashes with a thud when they fall victim to an unfortunate incident. As the plot unravels further, a murky dark past threatens to unleash the madness in all the four characters.