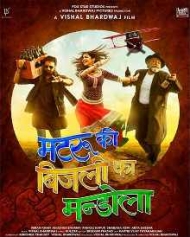 The movie is set in the rustic surroundings of a village in Haryana, Matru Ki Bijlee Ka Mandola is a comedy-drama about Harry Mandola (Pankaj Kapoor), a wealthy industrialist who loves his drink, his daughter Bijlee (Anushka Sharma) and the unusual bond they both share with Harry's man Friday, Matru (Imran Khan).

Much to her father's delight, Bijlee is all set to marry Baadal (Aarya Babbar), the son of a powerful politician Chaudhari Devi (Shabana Aami).

This alliance which is far from just being a simple union of two young people becomes the seed for a story that brings twists and turns in the lives of Matru,...