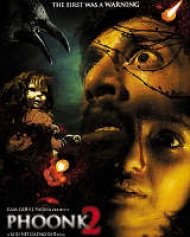 Phoonk 1 ends with the killing of Madhu, the woman who casts a black magic spell on Rajiv’s daughter Raksha. Phoonk 2 begins with Madhu’s ghost returning from the grave to seek revenge on the family. On bagging a new construction project, Rajiv moves with his family to a new place.

Raksha and Rohan begin exploring the new place and the surroundings- the lonely beach and then the woods behind the house. The terror begins with Raksha and Rohan finding a doll in the woods and then it progresses to a series of highly traumatising experiences for the whole family.

Manja, the only man whom Rajiv could turn to, meets a gruesome death at the hands of the black magic woman Madhu’s...