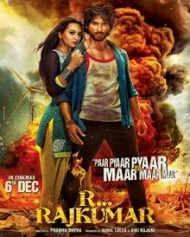 U/A | Action Drama
Release Date : 06 Dec 2013
Cast : Shahid Kapoor, Sonakshi Sinha
Director : Prabhu Deva
Synopsis
R Rajkumar ealier known as Rambo Rajkumar, is an action packed movie. R Rajkumar is a visually striking, stylized and persuasively real film. Audiences will see the expensive canvas that it is shot in, depicted in a manner that is as real as it is raw.

Characters:
Shahid Kapoor essays the role of Rajkumar - a rugged, rebellious, passionate fighter who also has devilish charm. One moment he makes you feel really comfortable and the very next, completely ill at ease! Rajkumar is sexy, brooding and raw!

Sonakshi Sinha plays the role of Chanda – a gorgeous, strong character. She is the niece of a poppy lord called Manik Parmar. Feisty, independent with a mind of her own, Chanda has you weak in the knees one moment and running for safety at the very next. A...