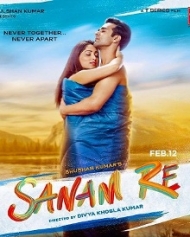 Story in detail:
Sanam Re is a breezy rom-com film. The story initially revolves around the two little characters, Aakash (Pulkit Samrat) and Shruti (Yami Gautam) and their innocent teen-age love story unaware of the fact that if there is love, there will surely be conflict.

To do big in his career, Pulkit decides to move to big town and couldn't stop himself from falling head over heels with a girl named Akansha. As expected, his past small town memories keep haunting him and then Aakash realizes that with Akansha it's just an infatuation and his destiny bring him in...