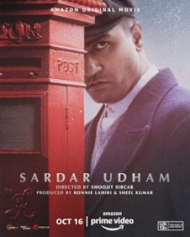 The movie is slated to release on Amazon Prime Video on 16 October 2021 in India and across 240 countries and territories. Sardar Udham Singh has its screenplay written by Ritesh Shah and Shubhendu Bhattacharya, the movie is produced by Ronnie Lahiri and Sheel Kumar under the banner  Rising Sun Films and Kino Works.

Udham Singh begins with a quick recalling of the horrific massacre in the walled city of Amritsar in which Brigadier-General Reginald Dyer had ordered his men to open fire at a peaceful gathering of over 20,000 people at Jallianwala Baug, without warning. The film then jumps to Punjab, 1931 where Sher Singh (Vicky Kaushal) is released from the prison after completing his term. He learns from his comrade Nand Singh that most of the leaders of Hindustan Socialist Republican Association (HSRA) have been either arrested or shot down by the British.

Post a series of events, Sher Singh finally lands up in London in 1934 to garner international support and regroup HSRA. After lying low for sometime, Singh gives a huge blow to the British Empire by carrying out the assassination of Michael O'Dyer at a joint meeting of the East India Association and the Central Asian Society (now Royal Society for Asian Affairs) at Caxton Hall, London in 1940. The rest of the plot revolves around the events which led to this assassination and the aftermath of the ghastly Jallianwala Baug Massacre. Read More