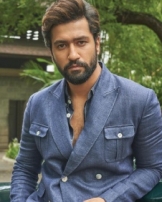 Vicky Kaushal was born in Mumbai to Bollywood director and stunt coordinator Sham Kaushal and Veena Kaushal. He has a brother , Sunny Kuashal. He is also an actor. He did his school education from Sheth Chunilal Dabodardas Barfivala High School, Mumbai. Later, he completed his graduation in Electonics and Telecommunications from Rajiv Gandhi Institute of Technology, Mumbai.

After dating for two years, Vicky Kaushal and Katrina Kaif got married on December 9, 2021.They got hitched in an intimate ceremony at Six Senses Fort Barwara, Rajasthan.

Intitally, he had apperaed in a minor roles in Anurag Kashyap's  films such as Luv Shuv Tey Chicken Khurana, Bombay Velvet, and Geek Out. After doing minor role, then he made his acting debut in the film Masan in 2015. Directed by Neeraj Ghaywan,the film was well-recieved at the box-office. With astonishing performances, Vickey, gained attention from audiences as well as critics.

In 2016, he was seen in two films, which was recieved mixed responses from audiences. His next film was  Meghna Gulzar's Raazi . Billed as an  spy thriller, Razi featured Alia Bhatt and Vicky Kaushal in the lead role. Released in 2018, the film was a box-office hit and entered into Rs 100 crore clubs.

After then, he featured in a lead role in the film 'Uri: The Surgical Strike' in 2018. The film  was directed by Aditya Dhar and it become a big commercial succes of that year. In 2019, he won  the National Film Award for Best Actor for his performance in the film.

Later, he was seen in  Bollywood star Sanjay Dutt's biopic Sanju. His another stellar performance in the film ' Sardar Udham'  proved that he is a versatile actor in the  industry.