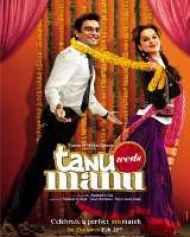 Marriages are made in heaven! Though the road to heaven might be a little "tedha".

Manu (R.Madhavan) is a guy from Delhi who has been a working as a doctor in London for the past 12 years. He comes down to India to get married because according to his family it is time. Tanu (Kangana Ranaut) is a girl from Kanpur who is done with her studies at Delhi University. She does not want an arranged marriage because she is in love with a guy named Raja (Jimmy Shergill) and wants to marry him.

Manu falls in love with Tanu for the first time when he comes to see her in Kanpur. However, she asks him to refuse the marriage proposal and he agrees. Manu goes to...