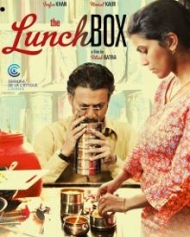 U/A | Drama
Release Date : 20 Sep 2013
Cast : Irrfan Khan, Nawazuddin Siddiqui
Director : Ritesh Batra
Synopsis
The Lunchbox is a drama based movie in which, the movie movie is set in Mumbai, revolves around a mistaken delivery in dabbawala (lunchbox service) of Mumbai, which leads to a relationship between an about to retire, Sudeep, also a lonely widower and an unhappy housewife, Ila as they start exchanging notes through the daily lunchbox.

The story is about Ila (Nimrat Kaur) and Saajan Fernandez( Irrfan) who exchange letters through the dabbawala service in Mumbai. This starts because of a mistake but eventually becomes a routine. In the beginning of the movie, we see that Ila cooking a sumptuous meal and actually sends a letter in the dabba to her husband but due to a mix up of the box, Saajan receives the same.

The Lunchbox is more than...