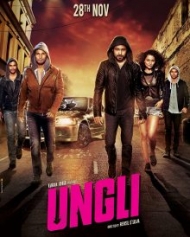 Movie in detail:
Abhay, Maya, Goti and Kalim are four friends. They began their friendship when they meet at a gym. When the friends find that the system is too corrupt to give them justice, they form a gang called Ungli.

They kidnap and take government babus to task. They teach a lesson to the Head of the RTO. They shame the Head of the BMC. And they even take on the might of the police.They do all this in a manner which makes fun of these departments and officials.

However, the Police Commissioner is not amused. He is being pressurized by the Chief Minister and the Government to put an end to these vigilantes who have taken the...