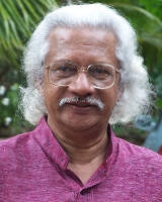 Moutatthu "Adoor" Gopalakrishnan Unnithan (July 3, 1941) is a seven-time National Award winning Indian film director, script writer, and producer. Most of his films are rarely released worldwide in DVD or VHS. They go to a few film festivals around the world, and are released in Kerala. They may be found in certain film societies in Kerala.

Biography
Gopalakrishnan was born on 3 July 1941 in the village of Pallickal (Medayil Bungalow) near Adoor, present day Kerala, India as the son of Madhavan Unnithan and Mouttathu Gauri Kunjamma. He started his artistic life as an actor in amateur plays when he was 8. Later he shifted his base to writing and direction and wrote and directed a few plays. After securing a degree in Economics, Political Science and Public Administration in 1961 from the Gandhigram Rural Institute[1], he worked as a Government officer near Dindigul in Tamilnadu . In 1962, he left his job to study screenwriting and direction from the Pune Film Institute. He completed his course from there with a scholarship from the Government of India. With his classmates and friends, Adoor established Chithralekha Film Society and Chalachithra Sahakarana Sangham; the organization was the first film society in Kerala and it aimed at production, distribution and exhibition of films in the co-operative sector.

Adoor has scripted and directed eleven feature films and about thirty Shorts and documentaries. Notable amongst the non-feature films are those on Kerala’s performing arts. Adoor's debut film the national award winning Swayamvaram(1972) was a milestone in Malayalam film history. The film was exhibited widely in various international film festivals including those held in Moscow, Melbourne, London and Paris. The films that followed namely Kodiyettam, Elippathayam, Mukhamukham, Anantharam, Mathilukal Vidheyan and Kathapurushan lived up to the reputation of his first film and were well received by critics at various film festivals and fetched him many awards. However, Mukhamukham was criticized in Kerala while Vidheyan was at the centre of a debate due to the differences in opinion between the writer of story of the film Sakhariya and Adoor.

Adoor's later films are Nizhalkuthu, narrating the experiences of an executioner who comes to know that one of his subjects was innocent, and Naalu Pennungal, a film adaptation of 4 short stories by Thakazhi Sivasankara Pillai.

All his films have won national and international awards (National award for best film twice, best director four times, and best script two times. His films have also won his actors and technicians several national awards). Adoor’s third feature, Elippathayam won him the coveted British Film Institute Award for 'the most original and imaginative film' of 1982. The International Film Critics Prize (FIPRESCI) has gone to him six times successively for Mukhamukham, Anantaram, Mathilukal, Vidheyan, Kathapurushan and Nizhalkkuthu. Winner of several international awards like the UNICEF film prize (Venice), OCIC film prize (Amiens), INTERFILM Prize (Mannheim) etc, his films have been shown in Cannes, Venice, Berlin, Toronto, London, Rotterdam and every important festival around the world. In consideration of his contribution to Indian cinema, the nation honoured him with the title of Padmashri in 1984.

Apart from his films, Adoor's major contribution towards introducing a new cinema culture in Kerala was the constitution of the first Film Society in Kerala, "Chitralekha Film Society". He also took active part in the constitution of "Chitralekha," Kerala's first Film Co-operative Society for film production. These movements triggered a fresh wave of films, called "art films," by directors like G Aravindan, PA Becker, KG George, Pavithran, and Raveendran. At a time this movement was so strong that even popular cinema synthesised with art cinema to create a new genre of films.

Style and Trademarks
Adoor has been known as a director who completely dictates every fine detail of his films. On the performance of actors in his movies, he stated that - "It is not the artist's job to do the detailing. I do not want different interpretations of roles that may clash with each other. It has to be absolutely unified." He normally does not encourage his crew to read the script or even the stories. The actors are told at the time of shooting about the role and the scenes before conducting several rehearsals. According to Adoor movies, the actor is not performing to the audience like the stage actor. Here they are acting for me. I am the audience and I will decide whether it is correct or not, enough or not."