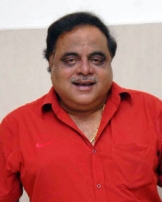 Malavallii Huche Gowda Ambareesh, also known as "Rebel-Star" and "Mandya-da Gandu," is a Kannada film actor who was born in Maddur Taluk in Karnataka's Mandya District. He is also a prominent politician from Karnataka State.

Ambarish was born in the village of Malavalli, in the Mandya district of Karnataka. His grandfather was the legendary violinist T. Choudayya; the famous Choudayya Memorial Hall and Choudayya Road in Bangalore are named after him. He was the sixth of seven children and the youngest among the brothers. He was born Amarnath, and his father, Mysore Huche Gowda, was a gentle and generous person. Ambrish's childhood was very much in his famous musician and maternal grandfather's shadow. Theirs was a large joint family in Mysore, and that’s where he started his formal studies.
Amabareesh married actress Sumalatha in December 1991 at the age of 39, and they have a son named Abhishek.

In the golden era of Kannada movies, the 1970s, Puttanna Kanagal was the name that spelled magic in the Kannada film industry. A maker of several big hits, he was respected by critics as well as the masses. He was known as a man who could even make a stone emote. Sangram suggested his name for a screen test in 1971, when Puttanna was looking for new faces to cast in his new film, "Nagara Havu and Ambrish's Good Friend." When the day of the screen test dawned, Ambarish went into hiding, and poor Sangram was left desperately hunting for him.

When he finally managed to locate him, he had to literally drag him to the studios [the famous Premier studios in Mysore]. The enigmatic director took one look at him and asked him to go put on his makeup and get ready for his test. Ambi was so sure that he would fail this test. He was tested for a small but powerful part of an eve-teasing college boy, and he was okayed for the part.

The film, which also introduced Vishnuvardan, another superstar, as the hero, went on to create history in the Karnataka movie industry. Ambrish, though playing a small role named "Jaleel," cornered a lot of attention, and the Kannada industry got a new young villain. When the film was remade in Hindi, he played the same role as Jeherilla Insan.

Ambrish became a hero with a film titled "Amarnath." But he first found success as a hero in a film directed by his old, close friend Rajendra Singh Babu. The year was 1980, and the film was "Antha," a record-breaking hit. The movie was remade into Hindi, Tamil, and Telugu. Here he played a famous role called "Kanwar Lal." His famous dialogue was "KUTTE KANWAR NAHI KANWAR LAL BOLO."

Ambareesh acted in over 200 films, including Puttanna Kanagal movies like Paduvara Halli Panddavaru, Shuba Mangala, and Ranganayaki. Ambareesh played in many films as the angry young man of the 1980s, and several films were tailor-made accordingly. The earliest of them was the political satire "Antha" (1981), directed by Mr. Rajendra Singh Babu and remade into Hindi and Tamil. This controversial film was the first in India to depict politicians and government officials as corrupt and villainous. Chakravyuha and "New Delhi" were made on the same lines, the first remade into Hindi as "Inqulaab," starring Amitabh Bachchan, and the second a remake of the Malayalam hit of the same name. His other notable films include Ranganayaki, Tony, Rani Maharani, Olavina Udugore, Hrudaya Haaditu, Hongkongnalli Agent Amar, Mannina Doni, and Oda Huttidavaru. His performances in "Masanada Hoovu," "Elu Suttina Kote," and the Malayalam film "Gaanam" were critically acclaimed. He also shared the screen with Dr. Rajkumar. He is the evergreen friend of all actors in India.

Ambareesh was elected to the 12th Lok Sabha from the Mandya Parliamentary Constituency as a member of the Janata Dal. He later joined the Indian National Congress and has since continued to represent the same Mandya Lok Sabha constituency for two more terms. He was minister of state for information and broadcasting in the 14th Lok Sabha but resigned over his dissatisfaction with the Cauvery Dispute Tribunal award, though the resignation was not formally accepted. He was defeated in the May 2009 general elections.

Minister in the UPA
M.H. Ambareesh joined the cabinet of Prime Minister Manmohan Singh as a Minister of State for Information and Broadcasting. On October 24, 2006, he took the oath of office. However, due to the Cauvery issue, he resigned from the Union Council of Ministers.

Death
Amabareesh passed away at the age of 66 due to cardiac arrest on November 25, 2018.