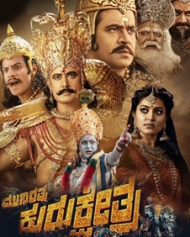 Kurukshetra movie made on the basis of Mahabharata which is directed by Naganna and produced by Munirathna while V Harikrishna scored music for this movie.

Muniratna's film uses the great war of Mahabharata as the premise. Anybody who's familiar with this epic tale can guess how the story goes about. But, the execution of the same on-screen is what is stealing the show. We wouldn't give out much regarding the story as that would be a buzz kill. However, it all starts...