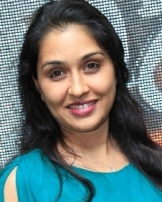 Anu Prabhakar is an Indian film actress. She has worked predominantly in Kannada films in addition to Telugu and Tamil films.

Anu Prabhakar is a daughter of M.V. Prabhakar and dubbing artist Gayathri Prabhakar. She is married to Krishna Kumar, son of veteran south Indian actress Jayanthi.

Anu Prabhakar first appeared as a child artist in the film 'Chapala Chennigaraya'. Her first movie in a female-lead role was Hrudaya Hrudaya (1999), a Kannada movie starring Shivarajkumar. She has also acted in two Tamil movies.