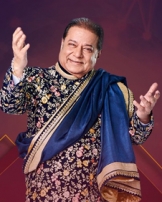 Anup Jalota is an Indian singer/musician, best known for his performances in the Indian musical form, the bhajan  and the Urdu form of poetry: ghazal.

He is popularly known as the Bhajan Samraat (Emperor of Bhajans).

Early life
Anup Jalota was born in Nainital, Uttarakhand to Purushottam Das Jalota, a renowned exponent of bhajan and hails from the Sham Chowrasi Gharana of Punjab. He was educated in Lucknow, Uttar Pradesh. He was married to singer Sonali Jalota until their divorce and Sonali's second marriage with Roop Kumar Rathod, Anup Jalota's closest tabla player and friend. Anup's brother, Ajay Jalota, currently lives in California. He has one older brother Anil Jalota and two sisters Anjali Dhir and Anita Mehra.

Career
Jalota started his musical career as a chorus singer in All India Radio. He is usually backed by a santoor player, a dholak player, a sarod player, a sarangi player, a violinist, a sitar player, a tabla player and a guitarist. Some of his popular bhajans include: Aisi Lagi Lagan, Main Nahi Makhan Khayo, Rang De Chunariya, Jag Me Sundar Hai Do Naam, and Chadariya Jhini Re Jhini.

He can sing in 8 different languages. He has recorded over 1,500 bhajans, ghazals and songs. He has performed over 5,000 live concerts spread over 400 cities on five continents. In over 30 years, he has released more than 200 albums of bhajans and ghazals.

He is one among the contestants of Bigg Boss 12.