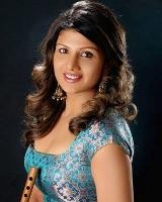 Rambha or Vijaya Lakshmi is an Indian film actress.

Her first screen name was Amritha which got changed to Rambha. She has acted in over 100 South Indian films and also in a number of Bollywood films. She has done several successful films in Malayalam, Tamil, Telugu, Hindi, Kannada, Bengali and Bhojpuri.

She got popular in Bollywood movies for her uncanny resemblance towards Divya Bharati, an actress who died during her popular stint in Bollywood. She is also squint-eyed and considers it a lucky charm.

Rambha's career started with a Telugu film "Aa Okkati Adakku" directed by E.V.V Sathyanarayana in 1993. In 1992, she starred in the Malayalam film Sargam opposite Vineeth. She again was paired up with Vineeth in Champakulam Thachan. She then entered Bollywood and was paired up with popular heroes like Salman Khan, Anil Kapoor, Akshay Kumar, Ajay Devgn, Sunil Shetty, Govinda, etc.

Rambha started her career as a producer with help of her brother for Three Roses in which Jyothika, Laila and Rambha were the three lead character. This film is a copy of the famous Hollywood movie Charlie's Angles. During the shooting of this movie, she fought with Jyothika regarding remuneration.

Finally, this film became a big flop and Rambha could not recover from the loss. She also sold her house in Chennai to the financiers to come out from the debts.

Presently, she is limited for item songs only. Rambha has acted in several languages and maintained a successful balance in Malayalam, Telugu, Tamil, Hindi, Bengali, etc. She is currently concentrating on Bhojpuri films. Her film in Malayalam titled Paayum Puli in 2007 had got good reviews. Her career has been a very successful one, dominating all the languages that she has acted in.

She got the opportunity to pair up with the top actors of all languages with whom she's acted. Most of her movies are successful. She has acted in two Bengali films and now she has three Hindi films in her kitty.

Quick Gun Murugan vowed to save cows because he thinks he is a cowboy, where are Nassar plays the role of the owner of a fast-food restaurant that promotes beef eating.