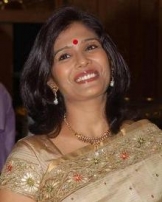 Anuradha Sriram is an Indian Carnatic and playback singer who hails from the South Indian state of Tamil Nadu. She has sung in many Tamil and Hindi films.

Anuradha Sriram Parasuram daughter of Playback singer Renuka Devi was born in Chennai on July 9, 1970. She completed her Bachelors in Music from Queen Mary's College, Chennai and Masters Degree in Queen Mary's College, Chennai. Learnt Carnatic classical music from the musical giant Kalyanaraman and Hindustani Classical Music from Manik Bua Takurdas. She had her debut in movies through Sri A R Rahman in Minsara Kanavu. Anuradha is from a Tamil family and completed her Master's in Ethnomusicology from Wesleyan University, US, prior to her foray into music. She is married to singer Sriram Parasuram.

Anuradha specializes in Carnatic music and has sung in over 1000 concerts worldwide. She is keenly interested in folk music. She has featured in a number of 'jugalbandhi' or fusion concerts along with her husband who is a Hindustani maestro.

Anuradha's cine career was triggered by her proficiency in the different raagas in Carnatic music and her distinguished educational background in music. She was eventually spotted by A. R. Rahman who gave her a chance in Minsara Kanavu.