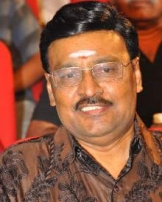 Bhagyaraj  is a director, actor, script-writer and producer, working in the Tamil film industry. His popularity peaked during the 1980s and early 1990s.

Bhagyaraj an ethnic Telugu speaking Naidu is married to Poornima Jayaram, his co-star in the film Darling Darling. His daughter Saranya Bhagyaraj debuted in his film Parijatham. His son Shanthnoo Bhagyaraj made his debut in the celluloid screen in a movie titled SakkaraKatti which released during 2008.

Beginning his career as an assistant to directors G. Ramakrishnan and Bharathiraja, Bhagyaraj became recognised for his scriptwriting talent. Among his early work was the script for the hit Tamil film Kizhake Pogum Rayil (1978) and Bharathiraja's Tik Tik Tik (1981). He made his directorial debut with the film Suvarillatha Chittirangal (1979).

He quickly established his own concern and started producing a string of distinctive films made mainly in the Tamil language. Bhagyaraj often cast himself in the lead roles of the films he scripts and directs, effectively carving out a niche for himself in the actor-auteur vein. His style of filmmaking is notable for its relatively elaborate, witty, and double entendre-laced script and socially-themed framework. His on-screen personae are typically characterised by their ironic sense of humour and intelligent bravado.

Bhagyaraj has made more than thirty films. He has made forays into the Hindi language film industry (Bollywood), directing stars of likes of Amitabh Bachchan. In recent times, the failure of his films like Gnana Pazham, Vaettiya Madichi Kattu (1997) and Sokka Thangam forced him to retire. His comeback film in 2006, Parijatham, was an effort well-received in the cinemas.