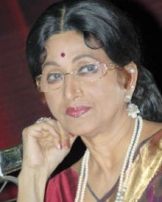 Bharathi is an Indian actress who has performed in Kannada and Tamil language films. She was most popular as an actress in the Kannada film industry during the late 1960s to 1980s.

She has acted with the most popular heroes such as Rajkumar, Ambareesh, Vishnuvardhan and others.