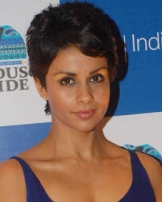 Gul Panag is a critically acclaimed Bollywood actress and former beauty queen who has competed in the Miss Universe pageant. Her notable films are Dhoop, Dor and Manorama Six Feet Under.

Gul Panag hails from an army background. Her father Lieutenant General H S Panag was in the Indian Army and was the Army Commander, Central Command. She has a younger brother , Sherbir Singh who was a nationally ranked skeet shooter and studied at her Alma Mater, The Lawrence School Lovedale.

She started her education in Sangrur, in Punjab and changed more than 14 schools including various Kendriya Vidyalayas (Chandigarh, Mhow, Leh, Wellington), The Lawrence School Lovedale, Ooty and the International School Of Lusaka, Zambia.

She completed her bachelor's degree in Mathematics from Punjabi University Patiala and master's in Political Science from Panjab University, Chandigarh.

Gul Panag won Miss India in 1999 and she also won the miss beautiful smile awards Miss Universe 1999 pageant. She worked in films like Jurm and Dhoop and also the serial Kashmeer (STAR Plus), but she rose to fame with the 2006 film, Dor in the role of Zeenat.

The 2007 film, Manorama Six Feet Under, inspired from Roman Polanski's Chinatown, earned her fabulous reviews. She acted next in Summer 2007. She has also acted in the film Hello (2008). Gul appeared on the front page and a photo shoot for Maxim (magazine) in September 2008.