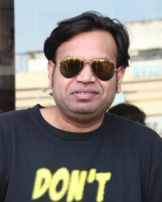 Premgi Amaren is an Indian playback singer, film composer, songwriter and actor. He was introduced as an actor in Vallavan by actor Silambarasan. His father is the well-known musician Gangai Amaren, while his brother is the character actor-turned-director, Venkat Prabhu. Premgi used to rap in Tamil movie songs. He has also sung in other genres as well. His ventures were Chennai 600028, Satham Podathey, Thozha, Santhosh subramaniam.

Besides being one of the four leading actors in Thozha, Premgi is also the Music Director of this movie. His uncle is Ilaiyaraaja and Yuvan Shankar Raja is his cousin, where Premgi works as a Music Arranger and Assistant music director. He used to work under his brother Venkat Prabhu's direction mostly. He shared screen space with Ajith Kumar for 'Mankatha'.

He is very well known for his infamous dialogue in Chennai 600028 "Enna Koduma Sir Ithu".

In 2005, he became an independent music director with Gnabagam Varuthe starring his brother. After that, he composed for Agathiyan's Nenjathai Killathe and for Thozha, in which he played one of the leading roles as well. Apart from film music, he has composed music for an episode titled Planet Galatta II – Adra Sakkae in a Singapore satellite channel.