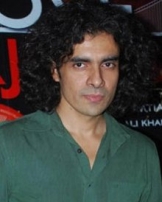 Imtiaz Ali is an Indian film director and writer. His 2007 film, Jab We Met, was a runaway hit in India.

Imtiaz was born and brought up in Jamshedpur, where he studied at D.B.M.S. English School. His relatives have cinema halls in Jamshedpur, Star Talkies, Jamshedpur Talkies and Karim Talkies. Later, he attended Hindu College in Delhi, where he took part in college theatre. Thereafter, he moved to Mumbai and did a course in marketing and advertising.

Ali began his career directing serials including Purushetraa for Zee TV and Imtihaana for Star Plus. After 7 years of doing so, he gradually moved on to Bollywood films starting with Socha Na Tha in 2005 with Abhay Deol and Ayesha Takia. In 2004, he also made a cameo appearance in Anurag Kashyap's Black Friday.

With 2 of his films he has proven he is one of the best among the romantic comedy movie directors. Even after the box office failure of the movie Socha Na Tha, it was critically praised for the romance in the movie. Jab We Met was the super hit movie of romance and drama genre which showed Kareena Kapoor in the coolest way.