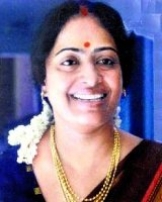 K.R.Vijaya was born in Kerala, like her mother. Her father was from Andhra Pradesh. Though born in Kerala, she spent most of her childhood in the holy Palani. K.R.Vijaya's father wanted her to become an actress, since he was acting in M.K.Radha's drama troupe at the time.

A Promising Start
K.R.Vijaya used to dance and act on stage. Television had only just come then, so they showed her performances on the television kept in a corner of the stage. Once, when she was dancing in Chennai, the actor Gemini Ganesan was present. He enjoyed her performance and said she had a good chance of becoming famous as a film star. And he was right.

Career
K.R.Vijaya's mother was from Kerala and her father from Andhra Pradesh. K.R Vijaya was born in Kerala. But, when she was young, spent most of her days in Palani. As her father was acting in M.K. Radha's drama troupe, he wanted her to act in films and make it big in the field.

Her first break itself as a hero in her debut film Karpagam, directed by K. S. Gopalakrishnan who also had the privilege of directing her 100th film Nathiyil Muthu!

The debut film Karpagamof K R Vijaya was released in the 1963. She played a main part and there was no looking back. Soon, she had done many other films.

It was in 1973 that she received the title of `Punnagai Arasi' in Tiruchirapalli, India. To have a good smile one needs to have good teeth, and she had that asset, thanks to her long time dentist Dr. Janakiraman. He is also a consultant for other celebrities from the South Indian filmdom and in Hindi too.

K.R Vijaya has starred in almost 400 films in all the South Indian languages, including 100 films each in Malayalam and Telugu, and half-a-dozen in Kannada, and one in Hindi titled Oonche Log. Her co-stars in the Hindi movie were RajKumar and Feroz Khan. She received more offers in Hindi, but did not accept them as she was busy in the South.

If she were to pick the best of her films, the list would include Karpagam, Selvam, Saraswathi Sabadham, Nenchirukkum Varai, Namma Veetu Theivam (this was the movie in which she first started depicting deities), Dheergasumangali (K.R Vijaya first started playing a mother in this film), Idhayakamalam, Thangapathakkam, Thirusoolam ... The list is long.

Without a doubt, K.R Vijaya liked Sivaji Ganesan's acting and the way MGR behaved with people and respected others. She like Jai Shankar, Muthuraman and quite a few others. She liked all the actresses. She is a fan of Pappima (Padmini), Vyjayanthimala, Saroja Devi and Savithri.

K R Vijaya reminsces about her first director "who gave her life" K. S. Gopalakrishnan who also directed her in her 100th film Nathaiyil Muthu. There was a big celebration. All the VVIPs were present, including MGR, Sivaji Ganesan, Kannada actor Rajkumar, A.V. Meiyappa Chettiar, and others. K.R Vijaya becomes nostalgic when she looks at the photographs of the function even now. Another unforgettable incident was the time when she with her husband and presented a golden crown to Lord Iyyappan, the Urchavamoorthy of the Lord came to her house. That was another memorable occasion.

Looking back she feel that she must thank God for giving her more than she needs, and the very best in life and films. K.R Vijaya was privileged to work with some very good directors, co-stars and technicians. She is happy and contended. She will keep acting until she is unable to work anymore. She also acts in the suntv teleserial Raja Rajeswari.

Trivia
She maybe an actress, but she is a fan too. She likes the films of Sivaji Ganesan,M. G. Ramachandran, Jai Shankar, R. Muthuraman, Padmini, Vyjayanthimala, Saroja Devi and Savithri. She feels happy with her occupation and says she will continue to work until she can work no more.

Filmography
K.R. Vijaya has performed in many films. Her first film ever was Karpagam in 1963, where she portrayed the main character, also called Karpagam. Apart from acting in many films, she has also acted in Raja Rajeswari and Kudumbam, two teleserials, that are shown on TV in both India and Sri Lanka.