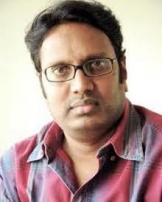 Gunasekar is an Indian film director and screenwriter known for his works exclusively in Telugu cinema. Gunasekhar directed the Children's classic Ramayanam (1997), which won the National Film Award for Best Children's Film, including several state Nandi Awards for that year, and was screened at the International Children’s Film Festival of India.

Before venturing into mainstream film direction, Gunasekar worked as an associate director to D. V. Narsaraju, Kranthi Kumar, and Ram Gopal Varma. Gunasekhar made his directorial debut with the socio-political Lathi (1992), for which he received the state Nandi Award for Best First Film of a Director.

The 2003 action film, Okkadu, which won eight state Nandi Awards, and four Filmfare Awards South including the Filmfare Award for Best Director – Telugu, the blockbuster film became the highest grossing Telugu film for that year, and was remade into various Indian languages. The 2004 drama film Arjun was screened at the International Film Festival of India in the mainstream section. His latest venture is the historical film, Rudhramadevi which was released in October 2015 for wide positive reviews and became one of the biggest hits of the year.