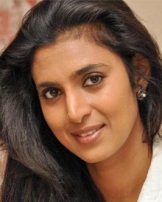 Kasthuri is an Indian film actress, model and TV show anchor. She was a popular Kollywood heroine in the early 1990s. Kasthuri was born in Madras. She had her schooling in Madras and started modelling while in high school. She won the Miss Madras title in 1992. Subsequently, she got offers to act in films. She debuted as heroine in the Tamil film Chinnavar alongside Prabhu Ganesan in 1992.

She acted in many Telugu films which gained her enough fan following in Andhra Pradesh. After the success of Bhaaratheeyudu, in which she acted as beloved daughter of Kamala Haasan, she got several opportunities to act opposite top heroes. Films like Soggadi pellam, merupu did not give any footage to her career.

Kasturi was the subject of a 30-minute documentary film Kasthuri: A South Indian Film star made by Richard Breyer and N. C. Rajamani in 1995.

Kasthuri bowed out of films after her Hindi short film The Bypass in 2003. In 2007, there were rumours that she was planning a comeback. But these rumours proved false.

She is made her comeback to Tamil films in 2009 with Malai Malai and Tamizh Padam. She also appeared in the photo-book A Beautiful Body Project: The Bodies of Mothers.
Bigg Boss 3 Contestant
Kasthuri will be competing with 14 other contestants in the Season 3 of Bigg Boss Tamil.