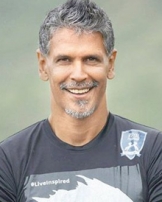 Milind Soman is an Indian model and actor. He was born in a Maharashtrian Chitpavan Brahmin family in Scotland on November 4,1965 and lived in England for seven years before his family moved back to India.

Milind has a Gowd Saraswat Brahmin maternal background. Milind Soman has made a distinguished mark as a model and is considered to be one of the most successful models in India.

Initially aspiring to be a swimmer, Milind faced rejection in his first modelling assignment with Graviera Suiting because he was thought to be too young to wear a suit. His breakthrough finally came as model for Thackersey Fabrics and he is perhaps best known for his part in Alisha Chinai's music video, Made in India.

Milind's career as an actor has been somewhat less successful. The actor believes in trying new and innovative themes rather than commercial cinema. Some of his more offbeat movies include 16th December, Pachaikili Muthucharam, Agni Varsha and Asoka.

In 2007, he appeared in Bhram, Say Salaam India and Bheja Fry. Milind has also acted in a number of English language and other foreign films, including Valley of Flowers, The Flag and the Swedish film Arn – The Knight Templar. He portrayed Saladin, the revered 12th-century Kurdish leader of the Arabs and Muslims. Milind has also acted in the lead role as Captain Vyom in a very famous superhero serial Captain Vyom in the mid 90's.

Milind who had previously produced 'Rules-Pyaar Ka Superhit Formula' also produced a children's television serial called 'Ghost Bana Dost'. He tried to personify his own childhood fantasy and fears with the serial.

Milind Soman married his girlfriend Mylene Jampanoi, a French actress in July 2006. The two were paired opposite each other while shooting for the movie 'Valley of Flowers', and apparently hated each other at first sight. Six months later, Milind took Mylene to Goa during one of the promotions of the movie and proposed to her. The two were immediately married in Goa, and the marriage was followed by a simple ceremony in the presence of their families and close friends.

Milind was also briefly engaged to model Madhu Sapre with whom he had done a controversial Tuff advertisement in which both were depicted wearing only shoes and a python. He is also rumoured to have dated other models such as Bipasha Basu, Dipannita Sharma and Gul Panag.