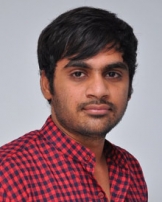 Sujeeth is a film Director, actor and screenwriter in the Telugu film industry. His directorial debut Run Raja Run became one of the biggest turning points of his career.

Sujeeth's upcoming movie Saaho with Baahubali Prabhas is a high budget movie once again under UV Creations done simultaneously in Telugu, Tamil and Hindi. Which is slated to release In 2018.