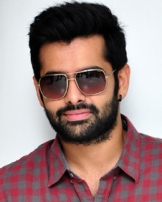 Ram started his acting career at the very young age of 12. He acted in a short film by the name of "ID" in Tamil and was awarded the "Best Actor" award among the 120 films screened from 60 countries at the European Film Festival conducted in Otten, Switzerland!

He is obsessed with the career option of becoming an actor, with profound commitment and zeal. His strenuous efforts, hard work (he worked almost 18 hours a day), and passion for acting resulted in his career and his being identified by renowned director and producer Mr. Y.V.S. Chowdary, a perfectionist to the core, for making his film Devadasu.

Ram took advantage of the opportunity and continued to show his commitment, sincerity, and dedication by playing the lead role in the film Devadasu.

Ram, the promising young star, has attained glory with his maiden film in Telugu, Devadasu. The Telugu film industry unexpectedly discovered a young and dynamic person with a lot of acting ability, extreme ease with dancing skills, and the ability to portray action scenes as well.

He is known as the "Youngest Hero of the South." The Telugu film industry admired the new talent, and the audience made it a big blockbuster, creating a history of running 175 days in 17 centres for a debutant hero.

His performance in the film got him real recognition when he got a second opportunity in the film Jagadam from another perfectionist director, Mr. Sukumar. It was a crazy project with high expectations that did well for around 14 crores, which is yet another record for a newcomer. Even though it did not fare well at the box office, Ram got much critical acclaim for his performance.

Then he did his third film, "Ready for his home banner, "Sri Sravanthi Movies," which turned out to be another blockbuster for him and a top-grosser in the USA. It took him to a different level and established him as one of the top heroes in Tollywood.

His fourth film, Maska, had high expectations due to his earlier hits. Hansika and Sheela also appeared in Maska. It was released on January 14, 2009. It was directed by B. Gopal (of Samarasimha Reddy and Indra fame) It was produced by "Movie Special" Raju. It was a surprising combination with Chakri as a music director. The music met its expectations.

This movie, even though it was not the biggest hit in Ram's career, had massive openings and collected more than his previous films, thus making him a superstar.