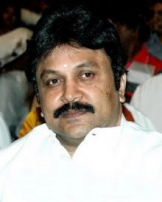 Prabhu Ganesan is a Tamil film actor and film producer who predominantly works in the Tamil film industry. He is the legendary Tamil actor Sivaji Ganesan's son. He is well known for his memorable roles in the movies Charlie Chaplin, Chandramuzhi, and Chinna Thambi.

Prabhu Ganesan is a Tamil Nadu native and the son of Sivaji and Kamala Ganesan.He has two sisters, Shanthi and Thenmozhi, as well as a brother who is a film producer, Ramkumar Ganesan. The actor attended Bishop Cotton Boys' School in Banglore for his education. He married Punitha in 1981, and the two of them had a daughter named Aishwarya Prabhu and a son named Vikram Prabhu.

Prabhu has acted in more than 125 movies. He made a number of movies after making his acting debut in 1982's Sangili. In addition to playing the lead, he has played a variety of parts, including comedic and antagonistic ones. During this time, Ganesan frequently made appearances alongside Rajinikanth, Kamal Hassan, and his father, Sivaji Ganesan.

In 1991, he won the Best Actor Award. He made his debut at Suyamvaram. In 2005, he co-starred with Rajinikanth in Guru Shishyan and Chandramukhi. Kamal Haasan co-starred with him in Vetri Vizha and Vasool Raja MBBS.

In the 2007 film Billa, he played a Malaysian police officer. He played supporting roles in the films Kuselan, Silambattam, and Ayan. Additionally, he performed in a number of films, including Asal, Maanja Velu, and Raavana by Mani Ratnam. He became legendary due to his Chandramukhi conversation, "Enna kodumai saravanan idhu."