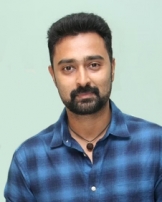 Prasanna is an Indian actor in the Tamil film industry. He made his debut in Five Star in 2002, which was produced by Mani Ratnam. Apart from lead roles, he has also played supporting roles. His film Achchamundu! Achchamundu!, in which he starred alongside Sneha and American actor John Shea was screened at many International film festivals, such as in Shanghai and Cairo. He was the host of the short-lived game show Honeymoon Jodigal on Sun TV in 2010.

Prasanna was born to an upper middle-class Iyer family in Trichy. His father was an employee in BHEL and his mother is a housewife. He completed his schooling from BHEL Matriculation Higher Secondary School, Trichy. He has a younger brother. Prasanna was good at mimicry and acting, when he was in school and college. He had stated that he always wanted to become an actor.

He was an EEE student in Saranathan College of Engineering, Tiruchirapalli, when he responded to an open audition for actors in Susi Ganesan's Five Star (2002), although his parents were unhappy with his decision. During the filming of Achchamundu! Achchamundu!, it was reported that he and Sneha fell in love. Prasanna married Sneha on the 11th of May, 2012.

Five Star, produced by Mani Ratnam's Madras Talkies, featured Prasanna alongside four other newcomers, most notably Kanika. It was well received by the critics and performed modestly at the box office. His next two films, Ragasiyamai (2003) and Kadhal Dot Com (2004), did not fare well commercially.

After Five Star, his noteworthy performance came in Azhagiya Theeye (2004). He cites that the time between Five Star and Azhagiya Theeye was "a painful one", since the roles offered to him were "not the ones" he wanted to play.

The film, involving an ensemble cast, was produced by Prakash Raj's Duet Movies and directed by Radha Mohan. Critics commented that he had improved in emoting, labelling his "voice modulation in the humorous scenes" as "impressive".

Prakash Raj, impressed by his performance in the film, offered him the lead character in his next production, Kanda Naal Mudhal, too. The triangular love story, directed by the newcomer V. Priya, costarring Laila and Karthik Kumar, was a commercial success. The comedy flick Cheena Thaana 001 co-starring Sheela and Vadivelu was his only 2007 release.

In 2008, he was seen in three films. He starred in Siddique's comedy thriller Sadhu Miranda. His role of a modern-day villain was a huge hit in Mysskin's film Anjathey. His negative role was critically acclaimed and fetched him a nomination at the 56th Filmfare Awards South in the Best Supporting Actor category. He played the lead in Arun Vaidyanathan's Achchamundu! Achchamundu! (2009) opposite Sneha that dealt with the subject of pedophiles.

It received rave reviews, and was very well received internationally, but failed at the domestic box office. Manjal Veyil, yet another flick, was a big flop. During the period, he also worked as a voice actor, dubbing for Aryan Rajesh in Cheran's Pokkisham on the insistence of the director. Then, alongside with Sibiraj as antagonist, he starred in Shakthi S. Rajan's Naanayam as a protagonist, produced by S.P.B. Charan's Capital Film Works.

However, in the recent times, he has been losing out on more offers. Earlier, he had signed up for a film titled Naikkutty produced by V. Z. Durai but he stepped out due to some unknown reasons. Again, in Bale Pandiya directed by Siddharth Chandrasekhar, Prasanna was replaced by Vennila Kabadi Kuzhu fame Vishnu Vishal. He was seen in a cameo appearance in Venkat Prabhu's comedy film Goa, followed by a supporting role as a local gangster in Baana Kaathadi.

A review from Times of India wrote that "with his eyes-to-die-for and underplayed violence, Prasanna easily steals the show". In 2011, he performed a lead role alongside director-actor Cheran in the thriller film Muran. His character, a "spoiled brat" and the son of a millionaire, had again negative shades. He was also approached for Lucky Jokers, which he could not take due to his busy schedule with Muran.