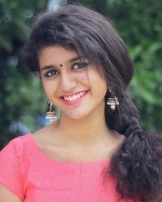 Priya Prakash is an actress who is a prominent face among audiences in South Indian and Bollywood Film Industry. She made her first debut in Malayalam Cinema with the film Oru Adar Love  directed by Omar Lulu in 2018.The actress who gained the  people attention after the release of the song ‘Manikya Malaraya Poovi’ from ‘Oru Adaar Love’. And soon, she became the trending topic on the internet with just a'wink'.Apart from being an actor, she is also a model and playback singer in the industry.

Priya Praksah Varrier stepped into the film  industry in 2018. She made her first debut in Malayalam Film Industry in the film' Oru Adaar Love’. She is an young actress and who is well-known among audiences after the  release of the song' Manikya Malaraya Poovi' from ' Oru Adaar Love’. With her cute expressions in the song made her famous in the industry.

Being a singer is hard, but Priya Prakash who proved herself as a successful play back singer in her career life. Priya made her playback singing debut in 2019, for the film  Finals alongside Naresh Iyer. She has received much appreciation from audience for her vocal performance.

Apart from acting in Malayalam films, she is also  famous in Tamil , Telugu and Bollywood industry. In 2021, Priya made her first debut in Telugu Cinema with the film Check. She appeared in a lead role along with Rakul Preet Singh and Nithin. Later she acted in an another film  Ishq: Not A Love Story. The actress played a lead role along with Tejja Seja. The film was a remade of Malayalam Super hit Film Ishq. How ever,the  film in  telugu was bombed at the box office miserably.