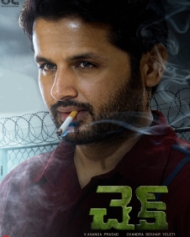 Check is a romantic action thriller movie directed by Chandra Sekhar Yeleti. The movie casts Nithiin, Rakul Preet Singh and Priya Prakash Varrier are in the lead roles. The Music composed by Kalyani Malik while cinematography done by Rahul Shrivatsav and it is edited by Sanal Anirudhan. The film is produced by V. Ananda Prasad under Bhavya Creations banner.
Story
Aditya (Nitin) is a convicted murderer. He becomes a chess player under the influence of Shivannarayana (Sai ​​Chand) a fellow prisoner while serving his sentence in Gadwala Jail. However, lawyer Manasa (Rakul Preet Singh) enters the field for Aditya. The sequence reveals that he was branded a terrorist due to his girlfriend's Yatra (Priya Prakash Varrier).
Why Aditya got the terrorist impression due to the affair with his girlfriend Yatra. Why did Yatra deceive Aditya? Did Manasa prove that Aditya was innocent? How Aditya, who was a prisoner in prison, became Chess Grandmaster internationally. Why does Narasimhareddy (Sampath Raj) take revenge on Aditya? The Check film is the answer to the question of how Aditya finally got out of jail.
Release Date
Check movie released in theaters on February 26, 2021.