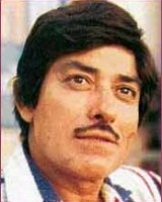 Raaj Kumar (Hindi: राज कुमार, Urdu: راج کُمار), born Kulbushan Pandit, October 8, 1926 – July 3, 1996) was an Indian actor in Bollywood movies. Raaj Kumar started out as sub-inspector of Mumbai police in the late 1940s before he turned to acting with the unnoticed 1952 film Rangili. He shot to fame with the Oscar-nominated 1957 film Mother India and went onto star in over 70 Bollywood films in a career that spanned over four decades. He was known for his special style of dialogue delivery and for having a gravelly voice which made him an icon in the industry. Apart from his unique style of dialogue delivery which became his trademark, he was known for his most famous catchphrase Jaani (beloved) which he frequently used in many of his films and also addressed people with the same word.

Personal life
He was born as "Kulbhushan Pandit" in Balochistan He was a Kashmiri Hindu - Saraswat Brahmin. He moved to Mumbai in the late 1940s and was a sub-inspector of the Mumbai police. He married Gayatri in the 1960s with whom he had three children, a son named Puru Raajkumar who is also an actor in the Bollywood industry, a daughter named Vastavikta who recently made her debut in films in 2006 with the film Eight Shani.

Career
In the early 1950s, he changed his name to Raaj Kumar, quit his job as a police inspector and turned to acting. He made his acting debut in Rangili (1952) which was unnoticed. After acting in a few more films in the next five years which failed to launch his career, his shot to fame in Mehboob Khan's classic Oscar-nominated blockbuster film Mother India (1957). His performance in the film as a poor farmer who loses his arms in an accident and then abandons his wife (played by Nargis) was widely appreciated and he went onto play many leading and supporting roles throughout the 1960s and 1970s.

In 1991 he appeared alongside legendary actor Dilip Kumar in Saudagar. The film was a huge success due to the hype of seeing both actors onscreen for the first time in 3 decades. Raaj and Dilip Kumar had previously appeared together playing brothers in Paigham (1959). His last big hit was Tiranga. This movie is almost always played in national channels of India during Independence and Republic days.

Death
Due to his many years of smoking, Raaj Kumar started suffering from a throat disease in the early 1990s which reduced his signature trademark voice to a whisper and caused his health to decline. His last film appearance was in God and Gun (1995) before his death at the age of 69 in July 1996. He died a few months before his son Puru Raajkumar made his debut in Bal Brahmachari which was released later that year. It was dedicated to his memory.