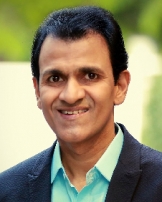 Raghavendra Rajkumar (Kannada: ರಾಘವೇಂದ್ರ ರಾಜಕುಮಾರ) is an actor in the Karnataka, India film Industry. He is the second son of the legendary Kannada matinee idol Dr. Rajkumar. After starring in lead roles in many kannada films he is now actively involved in production.

Like his father Raghavendra Rajkumar too sings his own songs in the movies. His earlier films did extremely well, however his popularity is low compared to his brothers Shivaraj Kumar and Puneet Rajkumar. His parents Parvathamma and Dr. Rajkumar are devotees of Raghavendra Swami. Raghavendra Rajkumar was named so for this reason.