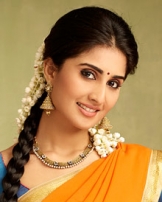 Shamili, better known as Baby Shamili, is a South Indian actress, who has appeared in Tamil, Malayalam, Kannada and Telugu films. She is probably best known for her critically acclaimed performance as the mentally challenged child Anjali in the film of the same title that fetched her the National Film Award for Best Child Artist at the age of 4.

Personal life
Shamili hails from an acting family, being the younger sister of actor Richard aka Rishi in Tollywood and actress Shalini and the sister-in-law of actor Ajith Kumar.

Acting career
She started acting at the age of two. She came to prominence after acting in Kannada, Malayalam films as a child, and then in Tamil following her performance in Mani Rathnam's 'Anjali', in which she portrayed a mentally challenged child, which garnered her the National Film Award for Best Child Artist.In 1992, she acted in Bharathan's Malooty which won her many appreciation.
She also acted as a teenager in Fazil's Harikrishnans as Mammooty and Mohanlal's little sibling. In kannada she made Dakshayini, Kadambari (1993), Karulina Kudi (1995), Bhairavi (1991), Chinna Nee Naguthiru (1993). She stopped acting in kannada 10 years ago, but still she is the famous child actress.

She played her first female lead role in Anand Ranga's directorial debut Oy! (2009) alongside Siddarth, though the film's mixed response at the box office prompted her to embark on yet another sabbatical.
Between 2010 and 2015, Shamili studied and worked in Singapore and turned down numerous opportunities to return to acting.
Debute In Tamil
She returned to Chennai, and is now working on the production of Veera Shivaji alongside Vikram Prabhu and an untitled film featuring Dhanush to be directed by Durai Senthilkumar.