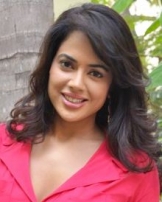 Sameera Reddy is an Indian actress. Sameera Reddy made her debut in ghazal singer Pankaj Udhas's music video, "Aur Aahista", when she had just become a graduate. The song was appreciated and her looks were noticed. She earned her ticket to Bollywood with a pivotal role in the Hindi feature film, Maine Dil Tujhko Diya in 2002.

She is famous for her role in Musafir. Luck favoured Sameera in the South Indian Tamil Cinema where she acted in a movie Vaaranam Aayiram directed by Gautham Menon which proved to be a hit.

Sameera's acting and modest portrayal of a confident and down-to-earth girl Meghna earned her rave reviews. She was believed to have lost weight for the film and did extensive make up to pull off a slim good looking modern girl.

Her performance was been rated as one of her best so far and the character included very sophisticated dialogue delivery with more importance given to facial expressions. There was a definite rise in her career graph and Sameera was looking to face the brighter side of Filmdom.

Her role in Musafir gave her a glamorous image - one that she had evidently tried to shed through her choices thereafter. Sameera has a hardcore following among her fans, and worked her way up to the top as a leading Bollywood actress.

Sameera has two sisters, Meghna Reddy and Sushma Reddy. She graduated from Sydenham College. She did her schooling from Bombay Scottish School, Mahim, Mumbai.