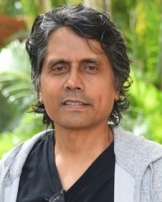 Nagesh Kukunoor is an Indian filmmaker and screenwriter. He is known for movies such as Hyderabad Blues (1998), 3 Deewarein (2003) and Iqbal (2005). His movie, 3 Deewarein won the Best Story Award at the 2003 Filmfare Awards.

Nagesh Kukunoor was born to Kusuma Sudershan and KS Naidu in Hyderabad in 1967. As a kid he loved watching Telugu, Hindi and English films in the theatres of his neighbourhood, Narayanguda in Hyderabad, Andhra Pradesh.

His parents sent him off to be schooled at Montfort Anglo-Indian School, Tamil Nadu, India where he got addicted to watching Hollywood films. After graduating from high school, he studied Chemical Engineering at Osmania University in Hyderabad, India and graduated with a Bachelor's degree.

To pursue graduate studies, he moved to Atlanta in 1988 where he completed his Master's degree at the Georgia Institute of Technology in chemical engineering.

After graduate school, Nagesh worked as an environmental consultant at Trinity Consultants in Dallas, TX and then Atlanta, Georgia. He also attended workshops in film and television. He studied acting at the Warehouse Actor's Theatre in Atlanta, and in 1994 co-produced and directed a short film, "One Culture at a Time".

He shortly returned to India to pursue a career in film making but realized that he was short of money. So he went back to the U.S. to work as a consultant again where he was able to travel the world and acquire some wealth through stock option. He returned to India in 1998 to pursue his dream of filmmaking.

He spent a year in Mumbai to understand the workings of the Bollywood industry before deciding that his style would not fit in that milieu.

He invested the money he made from his engineering career in the USA in producing the movie Hyderabad Blues. It was based on a script that he wrote in Atlanta and dealt with Indians returning home from the United States of America. He directed and acted in the movie. It was made on a shoe-string budget of Rs. 17 lakhs (1.7 million, roughly equivalent to U.S. $ 40,000/-) and shot in 17 days.

It was perceived by Sanjay Arora, an independent film maker, and it was thought to be realistic and among one of the first movies to use Hyderabadi Urdu correctly. It became the most successful independent film in India. Apart from being featured in ten international film festivals, it had theatrical performances that ran for more than six months in Hyderabad, Mumbai and Bangalore.

After the success of his first movie, he went on to work with well-known actors and experimented in several genres. Rockford was a coming-of-the-age movie set in a boarding school, and co-starred Nandita Das.

Bollywood Calling was a satirical look at the Bollywood industry through the eyes of a failed Hollywood actor, and co-starred Om Puri, Navin Nischol and Perizaad Zorabian. He also wrote and starred in the movie.

His next movie, 3 Deewarein, was a thriller; it had actors such as Naseeruddin Shah, Juhi Chawla and Jackie Shroff. Keeping up with his earlier style, he developed a detailed script and did not deviate much from it. The result was a product that looked different from the regular Bollywood treatment of the theme.

He made a sequel to Hyderabad Blues but it was not successful. While waiting to see the fate of his two earlier films, he wrote the script going back to where he was when he made Hyderabad Blues.

Unlike in his earlier movies, he did not star in his 2005 movie Iqbal. Iqbal looks at the story of a deaf and mute cricketer hailing from a poor family of Indian Muslims, who wants to make it to the Indian cricket team. The film won a lot of awards and critical acclaim. The script written by Vipul K Rawal was well received.

Dor, released in 2006, received positive reviews in India. Adapted from the Malayalam film Perumazhakkalam, it is a tale of two women from two different worlds.

In 2008, Kukunoor made Bombay To Bangkok with Shreyas Talpade. His cast members from Iqbal, Shreyas Talpade and Yatin Karyekar, also appeared. Kukunoor was also an extended guest judge on the television show K for Kishore in 2007.

His next movie 8 x 10 Tasveer fared badly at the box office with Akshay Kumar in the lead role and Ayesha Takia as the female lead. It was a thriller with a touch of Hollywood style cinematography. The movie opened terribly and reportedly created friction between him and Akshay kumar because of his shoddy direction and mismanagement.

"I like to cast characters who are close to me. And this one gets as close to me as possible. I was once an environmental consultant. Akshay plays the part of an environment protection officer," Kukunoor said in an April 2009 interview.