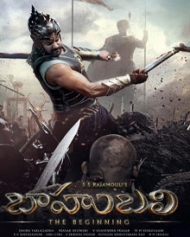 Baahubali movie is a epic story based  in which, Rana Daggubati is playing the role of prabhas' brother in negative lead. Anushka Shetty will be playing the female lead role in this movie.

After blockbuster movie Chatrapathi director SS Rajamouli once again working with Prabhas. Shobhu Yarlagadda and Prasad Devineni are producing this movie under ARKA Media Works banner. M. M. Keeravani is scoring music for this movie. Eega fame Sudeep doing an yet another important role in this movie.

The second part, Baahubali: The Conclusion will be released in 2016.

Vote: Who steals the show in Baahubali?

“A Man who can kill a hundred men can be a hero....but...a man who can save at least one life is God”. Bahubali is based on the essence of the above lines.

Shivudu (Prabhas) is the actual successor of the kingdom known as Mahishmati. But unfortunately, he becomes a victim of various internal conspiracies. But fortunately, Sivagami (Ramya Krishna) saves him from the cruel hands. Later, he is raised by a tribe on the hills.

The main target of Avantika is to save Devasena (Anushka) from the hands of Bhallaldeva. Shivudu who falls in love with Avantika takes the responsibility of saving Devasena. He travels to the kingdom where Devasena is being slaved and tortured.

To his surprise, the moment people notice him in that kingdom, they call him 'Bahubali'. He goes clueless about why people are treating him like god and Shivudu rescues Devasene and After meeting Kattappa (Sathyaraj), Shivudu comes to know about Bahubali and why there is enmity between him and Bhallaldeva. The rest must be watched on the screen.

S.S.Rajamouli Revealed in a press meet that the budget of the movie is more than Rs 250 crores.

Run time of the first part is 2 hours 35 minutes. Censor Board given U/A certificate.

The Audio was launched on 13 June 2015. Lyrics for the three songs were penned by Inaganti Sundar and Ananta Sriram, Ramajogayya Sastry, K Shiva Shakti Datta and

Chaitanya Prasad were written one each while Aditya and Noel Sean wrote the lyrics for the last song.

In Other Language Releases