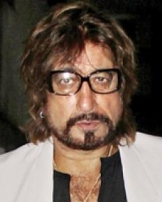 Shakti Kapoor is a Bollywood actor. He is notable for playing comic as well as villainous roles. He is known for acting alongside comedian Kader Khan in over 100 films.

He once acted in C-grade and pornographic movies. Since the start of his career in 1972, he has often been nominated for the Filmfare Award in the Best Comedian category and won once, for his performance in David Dhawan's film, Raja Babu.

During his career, he was part of many successful films, such as Aasha, Khiladi, Aankhen, Judwaa and many more. Shakti was also a regular fixture in Priyadarshan films like Hungama, Hulchul, Chup Chup Ke and Maalamaal Weekly.

Kapoor was embroiled in a controversy in 2005, when during a sting operation he solicited sexual favours from a television reporter posing as an aspiring Bollywood actress. The incident caused the actor to be ostracized for a short period of time, but then the public got over it.

He is married to Shivangi and has two children, a son Siddharth Kapoor and daughter Shraddha Kapoor. Siddarth Kapoor was once arrested in a pub. He is the brother-in-law of prominent Marathi and Hindi film actress Padmini Kolhapure.