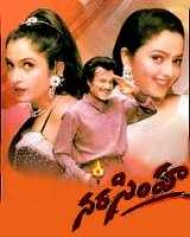 Action Drama
Release Date : 23 May 1999
Cast : Rajinikanth, Ramya Krishnan
Director : K.S. Ravikumar
Synopsis
Narasimha is dubbed version of tamil super hit movie Padayappa and it is an action drama based movie in which, Narasimha (Rajinikanth) is an engineer.
Narasimha returns to his hometown to attend his sister's wedding. His sister's engaged to the son of his maternal uncle.
During this happy occasion, Narasimha's father's foster brother demands a share in the family property. But Narasimha's father (Sivaji Ganesan) gives all of the property to him. His family is forced to leave the family's house.
Due to this shock, his father dies at sight and his sister's wedding is cancelled because the groom went for money and married his Uncle's daughter. Also, Nilambiri (Ramya Krishnan), the spoilt daughter of his maternal uncle, is in love with him.