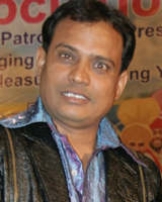 Sunil Pal is a popular Indian comedian and actor, and the 2005 winner of the The Great Indian Laughter Challenge on STAR One. Lately, he has been seen acting in many Bollywood flicks doing minor comic roles.

Sunil Pal came to Mumbai in 1995 when his father (who then used to work with Indian Railways) got transferred.

He joined the Junior College. There he used to mimic his professors and famous actors. After college, he struggled for three years.

During one of his interviews, he said, "I was working at a tea stall in Santacruz as waiter. Those days I'd sleep on the footpath. And I used to use the telephones of a nearby shop to keep in touch with my contacts in film industry."

In 2000, Sunil got a chance to go on a world tour with Aamir Khan (for Lagaan) as a junior artist. He was also involved in other tours of famous actors like Priety Zinta and Aishwarya Rai. On a tour with Sonu Nigam, he met Neeraj Vohra (writer and director) who later gave him a role in Phir Hera Pheri.

Later, Sunil Pal contested in The Great Indian Laughter Challenge, and won the competition. He was the favourite of viewers, who were enthralled by his remarkable ability of impersonating many film actors (like Sunil Shetty, Nana Patekar, Sunny Deol, Dharmendra, Naseeruddin Shah, and Irfan Khan) with commanding progress.

Soon after the show followed many small roles in Bollywood movies. So far he has worked in many films. His first major Hindi film, Bombay to Goa released in 2007, although he has played small bit roles in Hum Tum and Phir Hera Pheri.