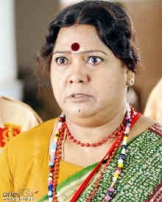 Telangana Shakuntala was a popular Telugu actress. She was known chiefly as a comedy actress, often playing villainous characters, for which she garnered fame in Tollywood. Her performances in movies like Osey Ramulamma, Nuvvu Nenu, Lakshmi, Okkadu and Veede were well received. She also acted on television and in Tamil-language films, where she was known by the name, Swarnakka. She spoke both Telangana and Rayalaseema accents very well in her roles.

She was born in a Maharashtrian family in Maharashtra, India. Her father was an Army Officer and her mother a housewife. She made her stage debut in a play at Ravindra Bharathi. She did many plays after that. She started her film career by playing a character role in the 1979 Telugu film Maa Bhoomi, directed by Goutam Ghose.

Shakuntala suffered cardiac arrest at her Hyderabad home on the morning of 14 June, 2014, five days after her 63rd birthday. She was admitted to the Narayana Hrudayalaya at around 2:30 AM IST, where she was declared dead upon arrival.