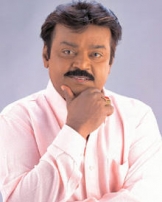 Vijayaraj Azhagarswami Naidu, professionally known by his stage name Vijayakanth, is a Tamil film actor and politician in Tamil Nadu, India. He is the founder of the Desiya Murpokku Dravida Kazhagam and a Member of the Legislative Assembly representing Virudhachalam, Tamil Nadu, India.

Vijayakanth was born as Vijayaraj Azhagar Swami Naidu on August 25, 1952, in Madurai, Tamil Nadu. His parents are K. N. Alagarswami Naidu and Aandal Azhagarswami who hailed from most prominent Balija Naidu family of Andhra Pradesh and Tamil Nadu.

He married Premalatha on January 31, 1990, and has two sons named Vijay Prabhakar and Shanmuga Pandian. Upon entering the film industry to pursue an acting career, he changed his name to "Vijayakanth", dropping the "raj" out of his name and suffixing "kanth," by director Khaja. He is nicknamed "Captain", which was taken from one of his popular films Captain Prabhakharan.

He is also considered a major unstoppable force of cynical humor, as he always takes the role of super-duper bingo gringo cop armed with .303 antique rifle to stop the world from demise, and people who don't get tickets for other good films normally end up watching his films and laughing their frustrations off, that way he is even considered best by Tamil film standards. He is instrumental in giving a break to actors like Mansoor Ali Khan, Livingston, Saroja Sampath and Sarath Kumar.

He formed the center-left winged Desiya Murpokku Dravida Kazhagam (DMDK), a regional political party in Tamil Nadu. He formally announced the party's formation on September 14, 2005, at Madurai. His party contested in all 234 seats in the 2006 assembly elections and won one seat contested by him.

Desiya Murpokku Dravida Kazhagam is a regional political party formed by the Tamil cinema actor Vijayakanth in Tamil Nadu along the lines of the regional Dravidian political parties. He formally announced the party's formation on September 14, 2005, at Madurai. The party's head office is in Koyambedu, Chennai.

The party polled almost 3 million votes (about 10% share), which was surprisingly a good show for a new party of its kind. All the candidates of the DMDK with the exception of Mr. Vijaykanth lost the elections in 2006.

Vijaykanth has declared that he would not ask donations for his party, and most of the funding for the party comes from his own pocket. He has so far rejected alliances with other political parties. In a by-elections to Madurai Central assembly constituency DMDK had secured around 17000 votes which is just 2000 votes less than ADMK. DMDK was also able to secure a significant number of seats in the Local Body elections.