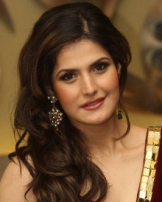 Zareen Khan is an Indian actress and model who appears in Bollywood films. She started her acting career in 2010 with the film Veer, starring Salman Khan.

Early days
Khan was born to a Muslim Pathan family in Mumbai. When she was in college she weighed almost 100 kgs. Although she had never planned to be model, she began to focus on losing weight and getting into shape. She gave up sweets and started going to the gym, eventually losing a large amount of weight. Khan was forced to abandon her education while in college and begin working due to the financial troubles of her family. With no marketable skills to rely on, she tried her hand at modeling. Khan did quite a few small assignments that fetched her enough money to run the house.

Acting career
She received her entry into acting when she was visiting the set of Yuvraaj at Subhash Ghai's film school Whistling Woods. Salman Khan noticed her and decided to cast her for his film Veer because "she looks the character - the sweet princess she is playing in Veer". After a screen test, Khan was confirmed for the role of Princess Yashodhara. She gained eight kilos in order to be more convincing as a 19th century princess.